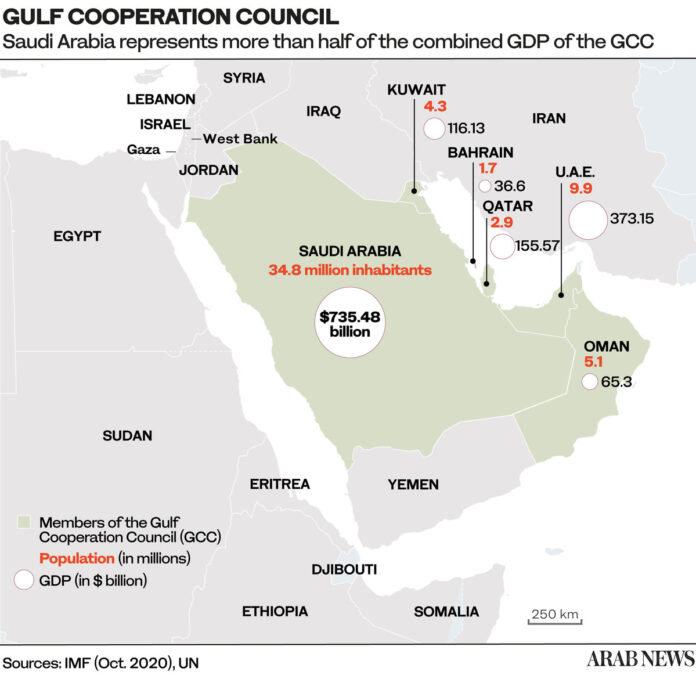 DUBAI: The signing of new investment deals reportedly worth $30 billion between Saudi Arabia and Oman is no doubt a positive development for solidifying cooperation between the member countries of the Gulf Cooperation Council. Yet the first questions that spring to mind are: Why Oman and why now?

From a geopolitical perspective, Saudi Arabia’s move is important as the Kingdom is now using its immense economic clout to support its smaller neighbors, starting with Iraq to the north and now Oman to the southeast.

It is broadly accepted that the region’s future social and political stability require economic stability. Many of Saudi Arabia’s neighbors are oil-producing nations whose journeys towards diversifying their economies to embrace other industries and markets are only just beginning.

Investment is seen as an effective way to help these countries move away from oil and generate more jobs in other sectors. But for Saudi investments to be of any long-term positive significance, they must align with the national and strategic goals of both countries.

Much like Saudi Arabia, Oman has its own reform agenda known as Oman Vision 2040, which aims to turn the Sultanate into an economic powerhouse with a sustainable fiscal and economic base. What Oman needs to make this bold vision a reality is access to the financial capital needed to expand its economy.

With its aging wells and reservoirs, Oman’s oil industry will require massive investment to maintain current capacity. The Sultanate is clearly aware that oil will not be its sole source of revenue in the future. In fact, its 2021 budget was drafted on the basis of oil costing a paltry $45 per barrel.

To help Oman realize its post-oil potential, Saudi Arabian companies have signed a raft of trade and infrastructure deals with their Omani counterparts that will not only increase foreign direct investments into the Sultanate, but also enhance its economic diversification.

Looking at energy investments in particular, the first agreement entails replicating what Saudi Arabia is doing in NEOM — its new high-tech smart-city on the Kingdom’s western Red Sea coast.

Omani energy provider OQ Group signed three of the agreements, the first of which was with Saudi Arabia’s ACWA Power and Air Products in the fields of petrochemicals, renewable energy and green hydrogen.

With this deal, Saudi Arabia is expanding its green hydrogen plan beyond its own borders and into Oman, which will boost the overall supply of hydrogen coming from the GCC.

Hydrogen has become a viable contender for energy transition away from environmentally harmful fossil fuels. Oman is ideally located to supply hydrogen to southeast and east Asian markets, while NEOM is better placed to ship it to European markets.

The second energy deal, relating to oil storage, was signed with Saudi Aramco, and the third, involving development of Oman’s Duqm Petrochemical Complex project, with SABIC.

Saudi Aramco’s strategy is to expand storage beyond the Strait of Hormuz. Bypassing the narrow waterway will help reduce the threat to shipping posed by blockades and even piracy, which risk wreaking havoc for global oil prices.

As for SABIC’s deal, Duqm is attracting more attention now that the joint Kuwait-Oman refinery is nearing completion. This will allow SABIC to have better access to feedstocks while utilizing Omani products. The impact of this will be reflected in job creation, a new petrochemical hub in Duqm and valuable knowledge transfer.

It is not just the energy sector that has benefited from the deals. The tourism industry in Oman can also expect a flood of new investments. Omran Group has signed a memorandum with the Saudi Dar Al-Arkan Real Estate Development Company for the development of the Yetti Beach in Oman.

Omran is known for creating sustainable and authentic tourism assets and lifestyle communities and destinations designed to drive economic growth and contribute to the diversification of the economy.

Oman-based firm Asyad, a logistics group, has signed an agreement with Saudi Bahri, a transportation and logistics company, while Minerals Development Oman signed a deal with the Kingdom’s Maaden Phosphate Co. to boost cooperation in the mining sector.

As for the timing, both counties have the means and the will to invest for the future. Oil prices are high, giving both countries the resources they need to support their shared national visions.

If all goes according to plan, Oman could be on track to realize its national goals well in advance of 2040, allowing it to join the 2030 club.