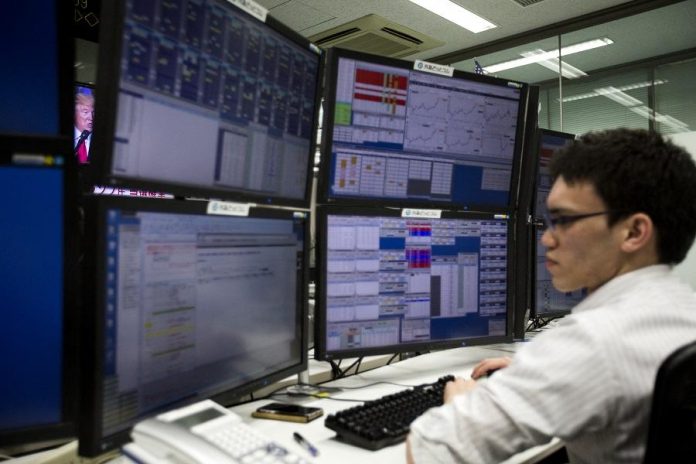 SINGAPORE/MIAMI: Asian stocks rebounded from two-week lows struck on Tuesday as rising commodity prices boosted market expectations of an improved growth outlook, a day after rising US Treasury yields and inflation prospects hit US tech shares.
MSCI’s broadest index of Asia-Pacific shares outside Japan ticked up 0.2 percent after dipping to 719.8, the lowest level in two weeks. The gauge has eased from last week’s record top but is still up just over 9 percent so far this year.
The Australian S&P/ASX 200 and Singapore’s Straits Times index both gained 0.6% and Hong Kong advanced 1.1 percent. The tech-laden South Korea’s Kospi was a prominent loser, down 0.3 percent and Taiwan eased 0.05 percent.
Japanese markets were closed for a public holiday.
“A higher interest rate environment forces investors to consider the opportunity costs of investments. Stocks that have significant borrowing, or produce no income for investors, may be particularly vulnerable,” said Michael McCarthy, chief market strategist at broker CMC Markets in Sydney.
On Wall Street, high-growth stocks such as Apple, Microsoft and Tesla weighed on the Nasdaq Composite, which shed 2.5 percent on Monday.
Commodity prices again strengthened on Tuesday. Oil prices rose on a tight global supply outlook after US production was hammered by frigid weather and an approaching meeting of top crude producers is expected to keep output largely in check.
Brent crude was up 2.2 percent at $66.7, a one-year high. Spot gold rose to a one-week high to $1,815.3 an ounce as inflation worries boosted the bullion’s appeal as a hedge.
The strength in commodities kept the Australian dollar steady at $0.79 against the US dollar, just near a three-year high.
Bond yields have risen sharply this month as prospects of more US fiscal stimulus boosted hopes for a faster economic recovery globally. However that is also fueling inflation worries, prompting investors to sell growth stocks that have rallied in recent months.
“Real US interest rates are now in positive territory, which has created some concern around the consequences for equities markets,” Cesar Perez Ruiz, chief investment officer at Pictet Wealth Management said in a report.
The dollar index was steady at 90.028, with the euro up 0.090 percent at $1.2165. The Japanese yen was little changed versus the greenback at 105.01 per dollar.
Cash Treasuries were not traded in Asia with Tokyo shut for holidays, but futures firmed slightly and showed an implied ten-year Treasury yield of 1.34 percent.
Markets will turn their focus to Federal Reserve Chair Jerome Powell who is delivering his semi-annual testimony on Tuesday. Powell is likely to reiterate a commitment to keeping policy super easy for as long as needed to drive inflation higher, analysts said.
“In addition to the ever-present question of what it may take for the Fed to consider tapering, the most pressing investor interest is at what point the Fed could respond to the level or volatility of interest rates after the recent increases,” foreign exchange strategist at Citi said in a note. - February 24, 2021 0
Only days before a dramatic engine failure on a United Airlines flight, federal regulators had met about requiring more frequent inspections of the same...

US sprinter Grant Holloway breaks the world record for the indoor...