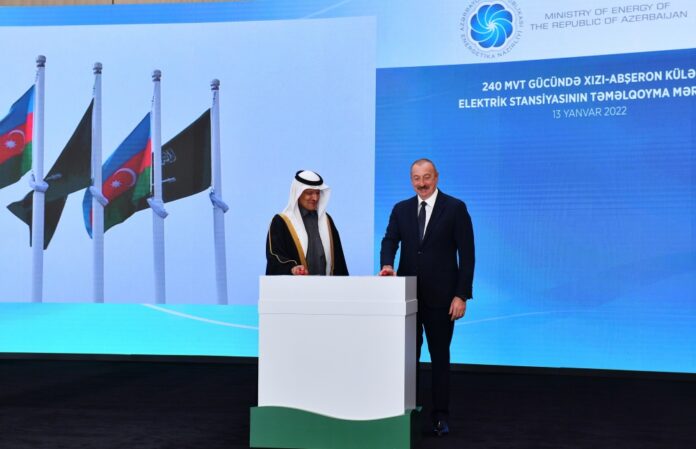 RIYADH: Azerbaijan’s ministry of energy and Saudi company ACWA Power celebrated the laying of the foundation stone for a wind power plant project in the country on Thursday.

The laying of the foundation stone came after agreements were signed to purchase power, invest in it and transfer it according to an independent power producing project model.

The project is the first and largest of its kind with foreign investment in the energy sector in Azerbaijan to date, and will contribute to achieving the country’s goals of generating 30 percent of energy from renewable energy sources.

By the fourth quarter of 2023, the project will provide about 3.7 percent of the total capacity of the electric power network in Azerbaijan by feeding 300,000 housing units with electric power and reducing 400,000 tons of carbon emissions annually.

Prince Abdulaziz stressed that the project reflects the partnership between the Kingdom and Azerbaijan in various fields, foremost of which is the energy sector.

He said that in addition to the two countries sharing diplomatic ties and economic relations, cooperation between them has been enhanced in recent years by Azerbaijan joining the OPEC+ agreement group.

The minister said that this confirms the depth of the relationship and understanding between the two countries, especially in light of the COVID-19 pandemic during which Azerbaijan stood side by side with other participants in the agreement, playing an important role in enhancing the stability and balance of global oil markets during the crisis.

Azerbaijan’s Energy Minister Parviz Shahbazov said: “We are pleased to attract private companies from outside Azerbaijan to invest in our country, given the many benefits that these investments provide by benefiting from global expertise, applying international best practices, and supporting efforts to develop local human capital.”

“The participation of local suppliers and contractors in the implementation of this project will contribute to upgrading national capabilities in the field of green projects and providing the local workforce with the expertise they need to enhance their global competitiveness,” he added.

All you need to know before Tadawul opens Jan. 27