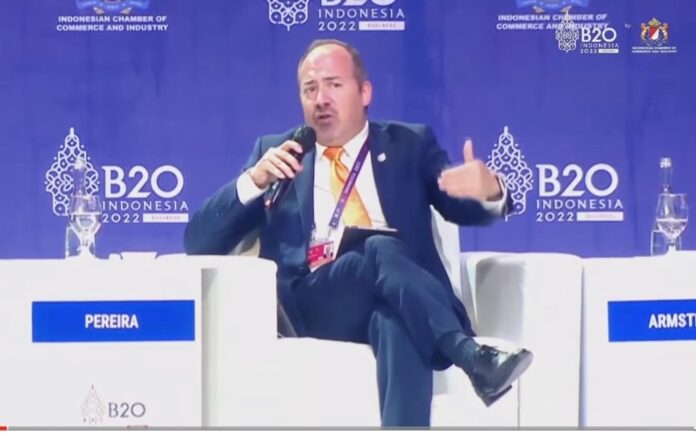 RIYADH: The demand for green funding is set to triple to $3 trillion by 2030, creating a huge funding gap that can only be filled through greater public-private participation, said a top economist of a global body.

The ideal partnership the public and private sector can have during the green transition, as PPP is very crucial to meet the gap the world is trying to accomplish, said Alvaro Pereira, G20 deputy finance and acting chief economist at OECD.

He said the core of today’s global energy crisis is “energy security”, and in the medium to long term, the key to energy security is going to be “investing in green energy.”

“We are investing $1 trillion every year in green financing but by 2030 this has to be tripled every year,” said Pereira during a panel discussion at the business 20 summit in Indonesia.

He said the private funding will be there as the public cannot provide this amount. “Here comes the importance of public-private partnerships.”

Speaking at the same summit, the UK’s Trade Commissioner for Asia Pacific Natalie Black said PPP is the only way toward energy transition.

“There is no way to deliver energy transition without providing an effective public and private partnership,” she said.

Black added: “We have so many examples where businesses or governments try to go alone, but it didn’t work out.”

However, for a successful PPP, Pereira said, “We need to have a great regulatory framework.”

“Strong, clear, prospering regulatory framework is very important. Otherwise, you won’t be able to track your investments,” he said.

While private sectors provide investments, the OECD economist stressed that governments around the world must be able to provide units and facilities to make sure the PPP is sustainable.

Pereira also added that PPP is very crucial in long-term businesses including the infrastructure of roads, airports, and green transition projects.

“PPP is important in areas where demand has not changed dramatically like in roads, airports, and energy transition,” he said.

Black agreed that the financial aspect of PPP is very important “as there is a huge gap in infrastructure financing, particularly in Asia.”

Organized by the Indonesian Chamber of Commerce at the behest of the Government of Indonesia, the B20 Summit is taking place on Nov. 13-14 in Bali.

The official G20 dialogue forum with the global business community was established with an aim of formulating policy recommendations on designated issues.