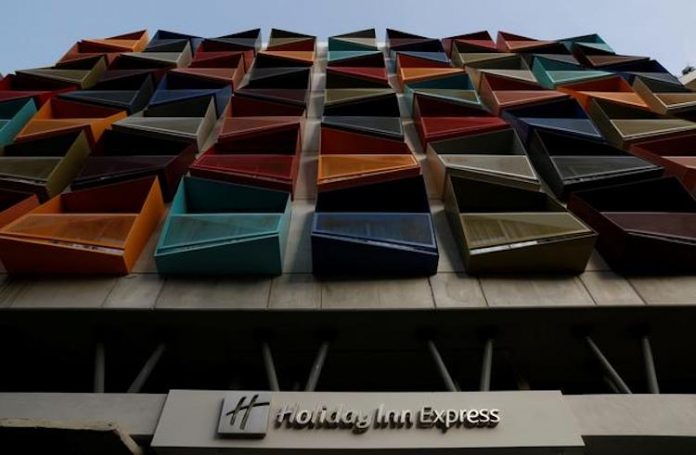 BENGALURU: InterContinental Hotels (IHG) booked an annual loss of $153 million on Tuesday, pummelled by repeated COVID-19 restrictions and lockdowns, but said a faster recovery in its Holiday Inn Express brand had helped it outperform in key markets.
The company, which previously scrapped its final dividend, said 2020 was the most challenging year in its history as revenue per available room slumped 52.5 percent, with global travel and entertainment spending remaining under pressure.
Pinning its hopes on the global roll-out of COVID-19 vaccines and a wider economic rebound, IHG said the industry was unlikely to see a recovery until later in the year but hinted that global travel was starting to recover.
“People want to travel again…It is the thing that people have missed most and so there is enormous pent up demand to travel,” Chief Financial Officer Paul Edgecliffe-Johnson said, adding that “travel will come back very rapidly.”
Shares of the company were up 3.8 percent at 5,516 pence by 0845 GMT, amid a near 3 percent rise on the FTSE 350 travel and leisure index as Britain saw a surge in flight and hotel bookings after the government said would-be holidaymakers will be given clarity on making plans for the summer by April 12.
Demand remained stronger in IHG’s Holiday Inn Express business, which represents about 70 percent of its rooms in the US market and has historically been impacted less and recovered faster than other segments in economic downturns, the company said.
“IHG is at the start of a prolonged period of commercial recovery,” Peel Hunt analysts said in a note.
Still, IHG reported a group operating loss of $153 million for the year ended Dec. 31, compared with a profit of $630 million last year.