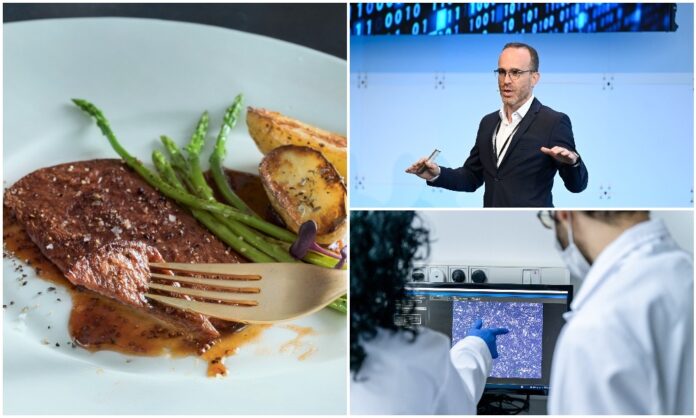 DAVOS: With concerns surrounding intensive agricultural farming and its damaging role in climate change growing, progress in the field of cell-cultivated meat has sped up in recent years.

Companies and scientists behind creating meat, fish or dairy products using the cells of an animal in a laboratory, without harm coming to the animal, have received substantial backing over the past half-decade.

One such company, Aleph Farms based in Israel, raised more than $100 million in last year’s Series B funding round and counts actor Leonardo DiCaprio among its backers.

It is on track for market launch by the end of this year, or the beginning of 2023 at the latest, its co-founder and CEO Didier Toubia told Arab News at the World Economic Forum.

“It will depend upon regulatory approval, but we are working actively on making sure the approvals arrive as quickly as possible, it’s not an exact science,” he said.

With food security issues growing, amid the COVID-19 pandemic, the war in Ukraine, the disruption to global supply chains and increase in shipping costs, there is a strong political will to come up with more secure, local ways to produce high-quality nutrition, Toubia said.

He believes the Middle East and Asia will be considerable markets for the cultivated meat sector.

Despite this being a relatively new technology, Toubia does not expect consumer resistance to eating cultivated meat over that produced by traditional methods. (Supplied/Aleph Farms/Technion-Israel Institute of Technology)

“In the Middle East, there are two or three countries relatively up to speed with cultivated meat,” he said.

“We are working quite closely with the UAE, with investment into the company at the Series B funding round last year.

“Because it’s produced in a closed system, we can produce meat independently from the availability of local arable land, in any climate, so it’s a great solution for producing meat in the Middle East or Asia, in countries which rely heavily on imports — especially for beef, which is our focus.

While the UAE and Israel are leading the way in the MENA region in terms of regulatory approval, Toubia said Saudi Arabia, Qatar and Kuwait are also looking into it seriously.

“Overall, I believe the Middle East and Asia will become one of the largest markets for cultivated meat 10 years down the road, no doubt about it,” he said.

Despite this being a relatively new technology, Toubia does not expect consumer resistance to eating cultivated meat over that produced by traditional methods, following market research.

“We have seen a high level of expected acceptance, ranging between 70-90 percent across the board in Middle East and Asia, overall it’s high everywhere,” he said.

“There will need to be education to really fulfil the potential of cultivated meat because it’s a new way of producing meat.

“But the benefits of it are clear, it’s a more secure way to produce meat, it’s safer because we have no pathogens, the transparency of the production is higher.

“Nutritional quality is important to us, but also culinary, sensory quality, so our first product will be thin cuts of beef, which fits in with the Asian food culture very well.

“We can also adjust the nutritional profile of our meat, to make it healthier or more suitable for specific consumers, and create a repeatable meat-eating experience, which is difficult with the standard meat, so there are lot of aspects that make it attractive to consumers,” he said.

Toubia also does not envisage cultivated meat production putting smallholder or traditional farms out of business, but rather acting as a developing alternative to intensive, concentrated animal farming practices and a supplement to the smaller operations.

Aleph Farms’ costs of production are expected to be 30 to 50 percent higher than conventional meat production at first, but Toubia said the firm has “a clear roadmap for lowering that” within five years of launch by 2028.