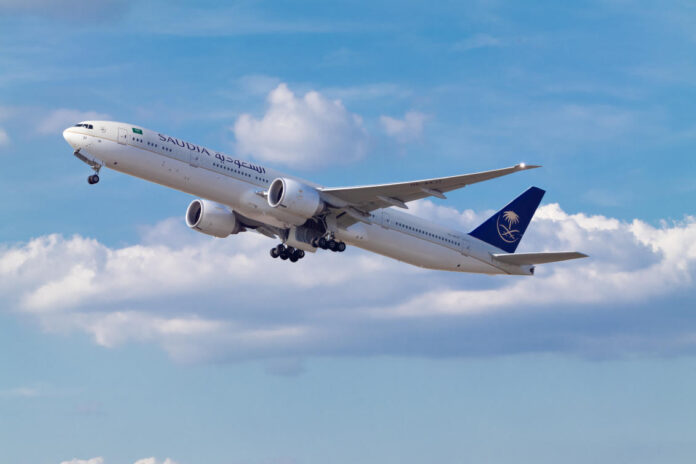 LONDON: The Kingdom’s flag carrier Saudia will launch an extra daily flight from London to Riyadh in mid-December, the company’s manager in the UK said on Tuesday.
Speaking at an event to reconnect UK businesses in the Umrah travel industry as international travel recovers from the effects of the COVID-19 pandemic, Sultan Otaify said the additional flight will depart from London Heathrow at 10 a.m. and arrive in Riyadh at 7 p.m.
“Starting from Dec.15, we will have double daily flights connecting London to Riyadh with more capacity and seats, while maintaining our flight to Jeddah,” Otaify said.
Saudi Arabia’s tourist visa, launched in 2019, has made the Kingdom “more accessible than ever,” he said.
Saudia was a sponsor of the Umrah+ Connect event in central London, which was hosted by the Council of British Hajjis. Other sponsors were Makkah Clock Royal Tower, hotel chain Makarem, destination management companies Discover Saudi, Tetrapylon, Deira Tours and Al-Taif for Umrah Services Company, as well as online travel agencies approved by the Hajj ministry — zamzam.com, Hulool Umrah, ZOWAR and British travel agency Masterfare.

Saudia’s manager for the UK Sultan Otaify (L) and the CEO of the Council of British Hajjis Rashid Mogradia at the Umrah+ Connect event in London. (Supplied)


Umrah travel businesses at the event explored ways of incorporating visits to other parts of the Kingdom into their packages and enhancing the pilgrim experience by offering a fuller cultural flavour of Saudi Arabia.
“We are here to share the experiences of our Hajj and Umrah businesses and look at ways in which we can add value to pilgrims traveling to the Kingdom to perform Umrah,” the CEO of the Council of British Hajjis, Rashid Mogradia, said.
“The Kingdom has made big strides in welcoming pilgrims and people are flocking to the Two Holy Mosques after they were opened at full capacity recently. Makkah thrives on pilgrims and they provide the hustle and bustle that is the soul of the city,” he said.
“It’s been a very difficult 18 months, not just for the tourism sector, but worldwide. However, the work that the government of Saudi Arabia has done to open up the Kingdom has been very welcome.”
“We are looking at ways to work together to ensure that British pilgrims and pilgrims worldwide can enjoy the facilities that the Kingdom is now providing them with,” Mogradia said.