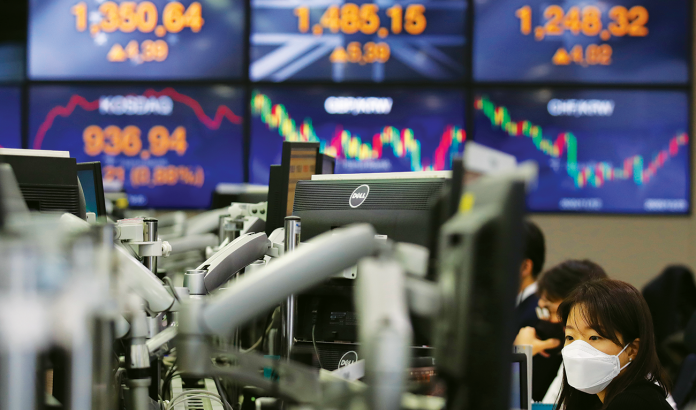 LONDON: Stocks rose on Wednesday as a last-minute intervention by US President Donald Trump over pandemic relief plans failed to wipe out positive sentiment, while the pound gained on the possibility of a Brexit trade deal.

In a video posted on Twitter, Trump said a stimulus bill, agreed after months of wrangling in Congress, was “a disgrace” and that he wanted to increase “ridiculously low” $600 checks for individuals to $2,000.

The possibility of a delay to long-awaited and hard-fought spending plans sent US S&P 500 futures down in Asia, but they later recovered and were trading up 0.25 percent.

“The market is betting on a fiscal deal coming through even if Trump is making noise about it,” said Peter Garnry, head of Equity Strategy Saxo Bank in Copenhagen.

The stimulus bill could be amended if the congressional leadership wants to do so, and if they don’t, Trump’s choices are to sign the bill into law, veto it, or do nothing and let it become law.

The stimulus funds are needed as the US recovery stalls and hospitals struggle to cope with a nationwide spike in coronavirus infections at the same time as an even more contagious variant of the disease spreads quickly in Britain.

However, Trump’s remarks kept a lid on gains, with Mizuho analysts saying “hopes for an unambiguous ‘Santa rally’ have been tragically hijacked.”

The MSCI world stock index rose 0.24 percent, but was trading more than 1 percent below record highs struck last week. The index is eyeing gains of over 12 percent for 2020, as trillions of dollars in stimulus have outweighed pandemic pain this year.

Britain and the European Union are nearing a Dec. 31 deadline for a Brexit transition period and have yet to agree on a trade deal.

ITV’s political editor said in a late-night tweet that separate sources had raised the possibility that the two sides would strike a deal on Wednesday.

European Commission President Ursula von der Leyen and British Prime Minister Boris Johnson are expected to hold another call on a trade deal on Wednesday or Thursday, sources with the bloc said.

Ireland’s prime minister said enough progress has been made that a deal was likely, though a British minister said serious issues remained unresolved.

In a further boost for the pound, Paris lifted its ban on freight coming from Britain because of the coronavirus variant.

The dollar index was down 0.1 percent and the euro gained 0.28 percent against the greenback, while eurozone bond yields, which move inversely to price, ticked up.

MSCI’s broadest index of Asia-Pacific shares outside Japan snapped three days of declines with a 0.6 percent rise, led by a jump in electric vehicle stocks in South Korea and China.