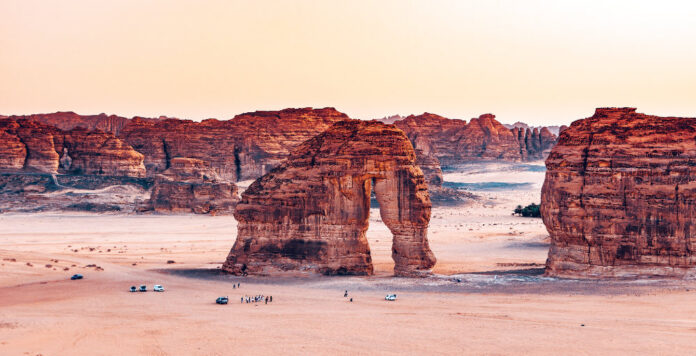 RIYADH: Saudi Arabia’s tourism industry is one of the sectors through which the Kingdom plans to diversify the economy with its Vision 2030 program and is an area where women can play a huge role, according to the head of one female empowerment group.

In an exclusive interview with Arab News, Mae Al-Mozaini, founder and CEO of the Arab Institute for Women’s Empowerment, said that this industry already employs many women. She was speaking at the Future Hospitality Summit in Riyadh.

Al-Mozaini said: “Investing in targeted training for Saudi women will have a return on investment of $400 billion by 2030. So that’s a big number of women participating to improve the economic prosperity of the Kingdom and for themselves.”

Saudi Arabia has been a pioneer in investing in women’s education.

The Kingdom’s Vision 2030 plan aims to boost female participation in the workforce from 22 percent to 30 percent by the end of the decade.

Despite the disproportionate impact of the COVID-19 pandemic on the distaff side globally, women in Saudi Arabia have made rapid social and professional strides on the back of the above-stated reforms.

According to the General Authority for Statistics, female participation in the Kingdom’s workforce rose to 33 percent at the end of 2020, up from 19 percent in 2016.

The growing numbers of women joining the workforce has helped the Kingdom achieve its target of female labor force participation 10 years ahead of time and lifted its international rankings in women’s economic inclusion and empowerment indices.

In the World Economic Forum’s Global Gender Gap Report 2021, Saudi Arabia was ranked 147 out of 156 countries.

Al-Mozaini added that Saudi women are ranked the most educated females in the Middle East and North Africa and investing in them to work in the tourism industry is a good move.

She added: “Saudi Arabia has been a pioneer in investing in women’s education. I don’t know any country where you go to college for free, and the government will give you money to stay in college. This means you don’t need a job to help your family while studying.

“The government wants you to graduate from school, so you can get a better job after college. I don’t know any country that does that. So, the Kingdom is a pioneer in investing in women.”

The Alkhobar-based Arab Institute for Women’s Empowerment was founded by Al-Mozaini in 2018 to “promote women’s empowerment and cultivate sustainable economic development.”

It aims to “raise the percentage of women in leadership by providing both emerging and accomplished female leaders with the knowledge, skills and networks needed to expand their impact on their individual organizations as well as their wider communities.”

Nusf aims to deliver programs that provide the necessary tools for Arab and Saudi women to succeed in professional and leadership roles.

Nusf in Arabic means “half,” and the institute aims to engage half the Kingdom’s population through empowerment and highlight the importance of investing in women.

For 2018-2022, the UN Economic and Social Council elected Saudi Arabia to the UN Commission on the Status of Women, and in the World Bank’s 2021 Women, Business and the Law Index, Saudi Arabia scored 80 out of 100, well ahead of the global average.