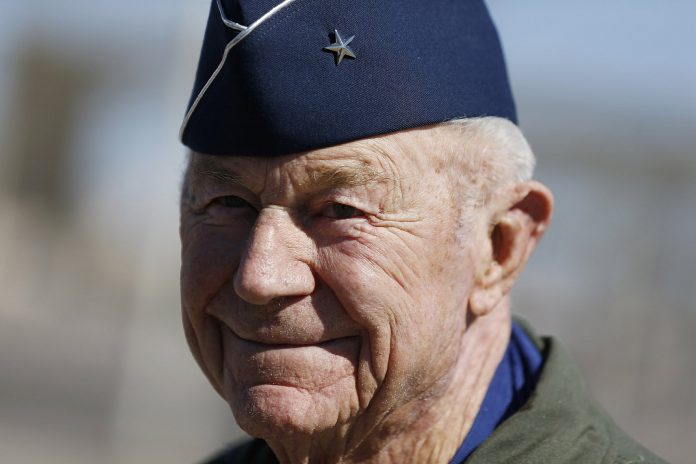 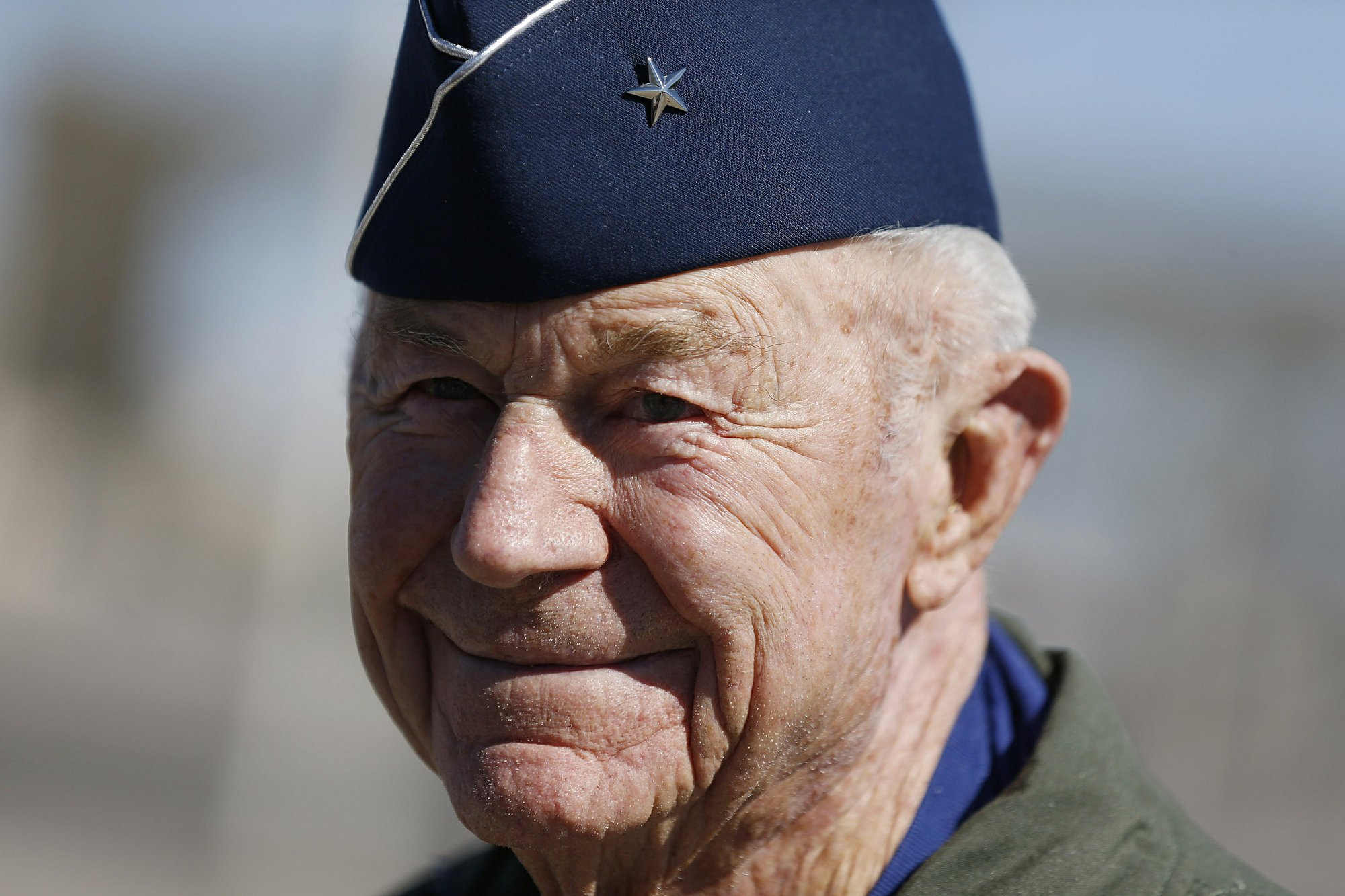 Retired Air Force Brig. Gen. Charles “Chuck” Yeager, the World War II fighter pilot ace and quintessential test pilot who showed he had the “right stuff” when in 1947 he became the first person to fly faster than sound, had died. He was 97.

Yeager died Monday, his wife, Victoria Yeager, said on his Twitter account. “It is w/ profound sorrow, I must tell you that my life love General Chuck Yeager passed just before 9pm ET. An incredible life well lived, America’s greatest Pilot, & a legacy of strength, adventure, & patriotism will be remembered forever.”

Yeager’s death is “a tremendous loss to our nation,” NASA Administrator Jim Bridenstine said in a statement.

“Gen. Yeager’s pioneering and innovative spirit advanced America’s abilities in the sky and set our nation’s dreams soaring into the jet age and the space age. He said, ‘You don’t concentrate on risks. You concentrate on results. No risk is too great to prevent the necessary job from getting done,’” Bridenstine said.

“In an age of media-made heroes, he is the real deal,” Edwards Air Force Base historian Jim Young said in August 2006 at the unveiling of a bronze statue of Yeager.

He was “the most righteous of all those with the right stuff,” said Maj. Gen. Curtis Bedke, commander of the Air Force Flight Test Center at Edwards.

“Living to a ripe old age is not an end in itself. The trick is to enjoy the years remaining,” he said in “Yeager: An Autobiography.”

“I haven’t yet done everything, but by the time I’m finished, I won’t have missed much,” he wrote. “If I auger in (crash) tomorrow, it won’t be with a frown on my face. I’ve had a ball.”

On Oct. 14, 1947, Yeager, then a 24-year-old captain, pushed an orange, bullet-shaped Bell X-1 rocket plane past 660 mph to break the sound barrier, at the time a daunting aviation milestone.

“Sure, I was apprehensive,” he said in 1968. “When you’re fooling around with something you don’t know much about, there has to be apprehension. But you don’t let that affect your job.”

The modest Yeager said in 1947 he could have gone even faster had the plane carried more fuel. He said the ride “was nice, just like riding fast in a car.”

Yeager nicknamed the rocket plane, and all his other aircraft, “Glamorous Glennis” for his wife, who died in 1990.

Yeager’s feat was kept top secret for about a year when the world thought the British had broken the sound barrier first.

“It wasn’t a matter of not having airplanes that would fly at speeds like this. It was a matter of keeping them from falling apart,” Yeager said.

Sixty-five years later to the minute, on Oct. 14, 2012, Yeager commemorated the feat, flying in the back seat of an F-15 Eagle as it broke the sound barrier at more than 30,000 feet above California’s Mojave Desert.

His exploits were told in Tom Wolfe’s book “The Right Stuff,” and the 1983 film it inspired.

Yeager was born Feb. 23, 1923, in Myra, a tiny community on the Mud River deep in an Appalachian hollow about 40 miles southwest of Charleston. The family later moved to Hamlin, the county seat. His father was an oil and gas driller and a farmer.

“What really strikes me looking over all those years is how lucky I was, how lucky, for example, to have been born in 1923 and not 1963 so that I came of age just as aviation itself was entering the modern era,” Yeager said in a December 1985 speech at the Smithsonian Air and Space Museum.

“I was just a lucky kid who caught the right ride,” he said.

Yeager enlisted in the Army Air Corps after graduating from high school in 1941. He later regretted that his lack of a college education prevented him from becoming an astronaut.

He started off as an aircraft mechanic and, despite becoming severely airsick during his first airplane ride, signed up for a program that allowed enlisted men to become pilots.

Yeager shot down 13 German planes on 64 missions during World War II, including five on a single mission. He was once shot down over German-held France but escaped with the help of French partisans.

After World War II, he became a test pilot beginning at Wright-Patterson Air Force Base in Dayton, Ohio.

Among the flights he made after breaking the sound barrier was one on Dec. 12. 1953, when he flew an X-1A to a record of more than 1,600 mph. He said he had gotten up at dawn that day and went hunting, bagging a goose before his flight. That night, he said, his family ate the goose for dinner.

He returned to combat during the Vietnam War, flying several missions a month in twin-engine B-57 Canberras making bombing and strafing runs over South Vietnam.

“I’ve flown 341 types of military planes in every country in the world and logged about 18,000 hours,” he said in an interview in the January 2009 issue of Men’s Journal. “It might sound funny, but I’ve never owned an airplane in my life. If you’re willing to bleed, Uncle Sam will give you all the planes you want.”

When Yeager left Hamlin, he was already known as a daredevil. On later visits, he often buzzed the town.

“I live just down the street from his mother,” said Gene Brewer, retired publisher of the weekly Lincoln Journal. “One day I climbed up on my roof with my 8 mm camera when he flew overhead. I thought he was going to take me off the roof. You can see the treetops in the bottom of the pictures.”

Yeager flew an F-80 under a Charleston bridge at 450 mph on Oct. 10, 1948, according to newspaper accounts. When he was asked to repeat the feat for photographers, Yeager replied: “You should never strafe the same place twice ’cause the gunners will be waiting for you.”

Yeager never forgot his roots and West Virginia named bridges, schools and Charleston’s airport after him.

“My beginnings back in West Virginia tell who I am to this day,” Yeager wrote. “My accomplishments as a test pilot tell more about luck, happenstance and a person’s destiny. But the guy who broke the sound barrier was the kid who swam the Mud River with a swiped watermelon or shot the head off a squirrel before going to school.”

Yeager was awarded the Silver Star, the Distinguished Flying Cross, the Bronze Star, the Air Medal and the Purple Heart. President Harry S. Truman awarded him the Collier air trophy in December 1948 for his breaking the sound barrier. He also received the Presidential Medal of Freedom in 1985.

Yeager retired from the Air Force in 1975 and moved to a ranch in Cedar Ridge in Northern California where he continued working as a consultant to the Air Force and Northrop Corp. and became well known to younger generations as a television pitchman for automotive parts and heat pumps.

He married Glennis Dickhouse of Oroville, California, on Feb. 26, 1945. She died of ovarian cancer in December 1990. They had four children: Donald, Michael, Sharon and Susan.