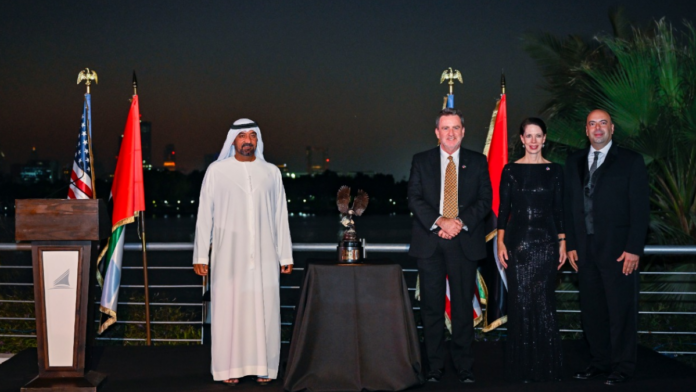 The American Business Council celebrated its 25th anniversary in Dubai this evening, Friday, as well as the ongoing advancement of relations between the two countries. His Highness Sheikh Ahmed bin Saeed Al Maktoum, Chairman of the Dubai Civil Aviation Authority and Supreme Chairman of the Emirates Airlines Group, was present.

The American Business Council expressed its gratitude and appreciation to His Highness Sheikh Mohammed bin Rashid Al Maktoum, Vice President and Prime Minister of the United Arab Emirates and Ruler of Dubai, for his support and encouragement of the UAE-US economic partnership, which has led to significant advancements in this area.

“The UAE and the United States have strong ties of friendship and partnership that have witnessed positive and fruitful development over the past years, at a time when many American companies find in Dubai the ideal environment through it, it is possible to enter the region’s markets and take advantage of the promising economic opportunities,” His Highness Sheikh Ahmed bin Saeed Al Maktoum congratulated the American Business Council on this occasion.

His Highness continued, “Dubai has succeeded in constructing a distinctive economic model and establishing itself as a major business centre in the region, and the starting point for all institutions seeking to expand their business in the region, thanks to the vision and directives of His Highness Sheikh Mohammed bin Rashid Al Maktoum, Vice President and Prime Minister of the UAE and Ruler of Dubai.”

Its rapidly expanding emerging markets, while His Highness established a dynamic and developed economic environment that strengthened the ties of the UAE and Dubai with global markets, served as the driving force behind strategic economic partnerships with various countries of the world, and contributed to luring international institutions and investments in a variety of fields luring elite talent and knowledge in a range of upcoming fields from around the globe.

During the ceremony, Shaun Murphy, the Chargé d’Affaires of the US Embassy to the UAE, gave a speech in which he expressed his nation’s pride in the friendship and cooperation it has with the United Arab Emirates.

He also mentioned the role that US businesses, which are thought to number more than 1,500, have played in fostering these ties. As these businesses contribute to expanding economic channels of cooperation and support the development efforts of the two countries in their pursuit of an opportunity-filled future, several of them have set up their regional headquarters and innovation centres in the UAE.

Sami Abu Saba, chairman of the American Business Council in Dubai, expressed his appreciation for Dubai’s initiatives and efforts to improve its economic environment in light of His Highness Sheikh Mohammed bin Rashid Al Maktoum’s vision and instructions while praising the relationships of economic cooperation between the UAE and the US.

It should be noted that the UAE market is one of the most significant markets for US trade in the Middle East and North Africa region, as evidenced by the volume of trade exchange between the two parties.

He emphasised the dedication of the member companies of the Council towards this and said that the 25th-anniversary celebration of the founding of the American Business Council in Dubai is proof of the level of appreciation the American corporate community, which includes a large selection of the most significant international American companies, has for the UAE, which it views as its second home. The partnership is a desire to grow and strengthen working relationships in order to progress to the next stage at greater levels.

The UAE’s commitment to protecting the environment, reducing emissions, and addressing the challenges of climate change, as well as the nation’s commitment to continuing to develop its economic environment and create more growth opportunities for its partners, were praised by the president of the American Business Council in Dubai. He also praised the Emirati global model in spreading the values of coexistence and tolerance as the cornerstones of a modern, developed society.

The occasion also featured the presentation of the “American Business Council 2022 Awards for Creativity, Sustainability and Small and Medium Enterprises” in front of a group of diplomats and regional directors of significant US corporations with operations in the nation.