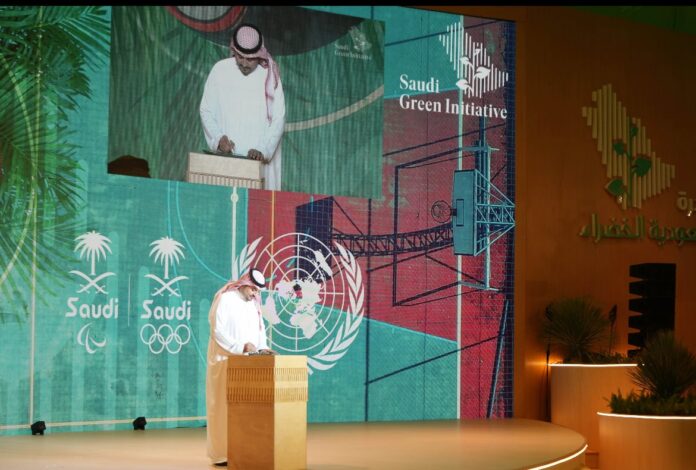 SHARM EL-SHEIKH: Sport has a “responsibility” to make society aware of climate change issues, the vice president of the Saudi Olympic and Paralympic Committee has insisted.

Speaking to Arab News on the sidelines of the UN Climate Change Conference, Prince Fahad Bin Jalawi talked up the importance of sport’s “soft power” and how it can be harnessed to highlight the Kingdom’s climate change objectives.

The official was speaking after the SOPC became an official signatory of the UN’s Sport for Climate Action framework during the Saudi Green Initiative 2022.

He said: “It is our responsibility to spread awareness about the climate issues and address them through sport, as well as join the forces of all sports organizations in the Kingdom to play a vital role that helps achieve the goals of Saudi Green Initiative and Vision 2030.”

Prince Jalawi sees the Saudi Green Initiative embedding a great thirst of the Saudi community for creating a sustainable community in the Kingdom and racing net-zero emissions.

“It is as a race that we can win, and the sporting movement would help achieving this goal for its influential power on the Saudi community,” he said.

The Prince expressed his appreciation for the Saudi Green Initiative’s notable efforts in encouraging climate action and sustainability in Saudi Arabia.

“We in our turn are complying with this commitment to combat climate change in and through sport,” he said.

The SOPC vice president said the climate crisis is a call of action for all to combat climate change at all levels.

“SOPC is working on expanding the scope of climate actions in the Kingdom to be extended to the sport level to contribute to finding solutions for the climate crisis in and through sports at the international, regional, and national levels,” he added.

Prince Jalawi said they are also keen to have a stronger reliance on the youth to move toward integrating a sustainable sporting movement in the Kingdom.

“We are placing youth engagement at the core of sport and ensure our commitment to helping them cultivate their skills and discover their potential that will be beneficial to the sporting movement,” he said.

The SGI forum, held on the sidelines of COP27 in the Egyptian Red Sea resort city of Sharm El-Sheikh under the patronage of Crown Prince Mohammed Bin Salman, focused on the Kingdom’s climate challenges and plans to address them.

It also highlighted the accomplishments of 39 Saudi stakeholders in achieving the goals of SGI and Vision 2030.

The Saudi initiative includes increasing renewables to 50 percent of the Kingdom’s energy mix by 2030.

The Kingdom plans to apply a circular carbon economy model, further invest in green transitions, enhance cooperation and knowledge transfer efforts, and activate partnerships between the public and private sectors.